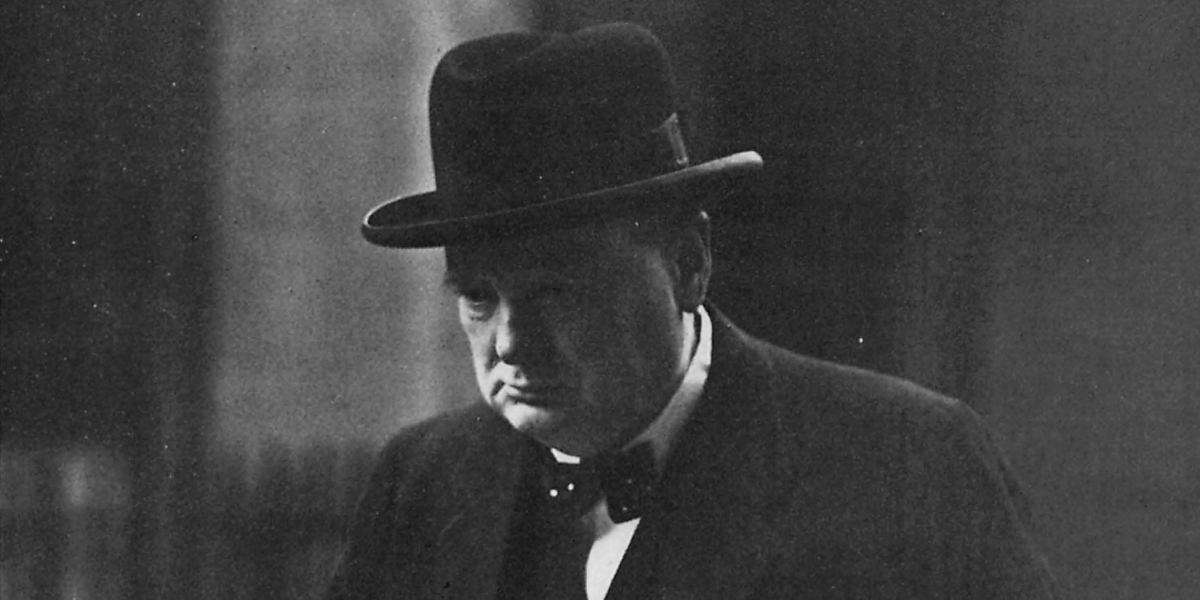 Despite being widely regarded as a war hero for his actions during the Boer War, Churchill battled tirelessly throughout his life to prevent global war. He feared the accumulated destructive power of mankind. But even though he feared global war greatly, this could not convince him to entertain a treaty with socialist Italy.

He says, "We must not regard war with the modern power as a kind of game in which we may take a hand, and with good luck, and good management, play adroitly for an evening and come home safe. A European war can not be anything but a cruel, heartrending struggle, which if we ever are to enjoy the bitter fruits of victory, must demand perhaps for several years, the whole manhood of the nation, the entire suspension of peaceful industries, and the concentrating to one end of every vital energy in the country."

That's an interesting prediction, isn't it? Because there hadn't really been a war like that before.

[Churchill said] “I have frequently been astonished since I have been in this House to hear with what composure and how glibly Members, and even Ministers, talk of a European war. I will not expatiate on the horrors of war, but there has been a great change which the House should not omit to notice. In former days, when wars arose from individual causes, from the policy of a Minister or the passion of a King, when they were fought by small regular armies of professional soldiers, and when their course was retarded by the difficulties of communication and supply, and often suspended by the winter season, it was possible to limit the liabilities of the combatants. But now, when mighty populations are impelled on each other, each individual severally embittered and inflamed—when the resources of science and civilization sweep away everything that might mitigate their fury—a European war can only end in the ruin of the vanquished and the scarcely less fatal commercial dislocation and exhaustion of the conquerors.

Democracy is more vindictive than Cabinets. The wars of peoples will be more terrible than those of kings.”

Look at those three factors. What's changed? Modern weapons that come from science. Social cohesion that comes from modern, inclusive society and the vast wealth and innovation. See, both of these are connected to the economy, right? Innovation. A modern economy innovates. It produces wealth, and that wealth can be used for war. That means that Churchill thought that modern society—like ancient societies for different reasons, by the way—contained the seeds of their own destruction. That's a very mature thought for a twenty-seven-year-old. Of course, he would maintain that thought for the rest of his life. Of nuclear weapons, which he helped to invent.

I don't have that, so I'll paraphrase it. When the hydrogen bomb was announced, [Churchill] said, "We've entered a period both meterless and leaden with doom." He said, "Our future's wars may involve, at the outset, the thing we find most precious, everything we have ever known of."

Churchill was afraid of war. All his life. He worked hard to prevent the two World Wars. That, by the way, makes it extraordinary, what he did in 1940. It's like on the armored train, except now in politics. Because what he did in 1940 was first, on May the twenty-eighth, persuade the government not to accept an offer to negotiate, put forth by Mussolini, not yet in the war. Really, Hitler's ally still. Everybody wanted to take it. It was natural. France was gone, Britain was puny. How could they fight them?

Churchill said in a cabinet meeting, impromptu, we only have notes of it. Didn't know the meeting was coming, didn't have time to prepare. At the end he said, "I've been thinking in the last few days whether it's part of my duty to open negotiations with that man. If I were for a moment to consider parlay or surrender, every one of you would tear me down from my place. If this island's story is to end at last, let it end when each of us lies choking in his own blood upon the ground."