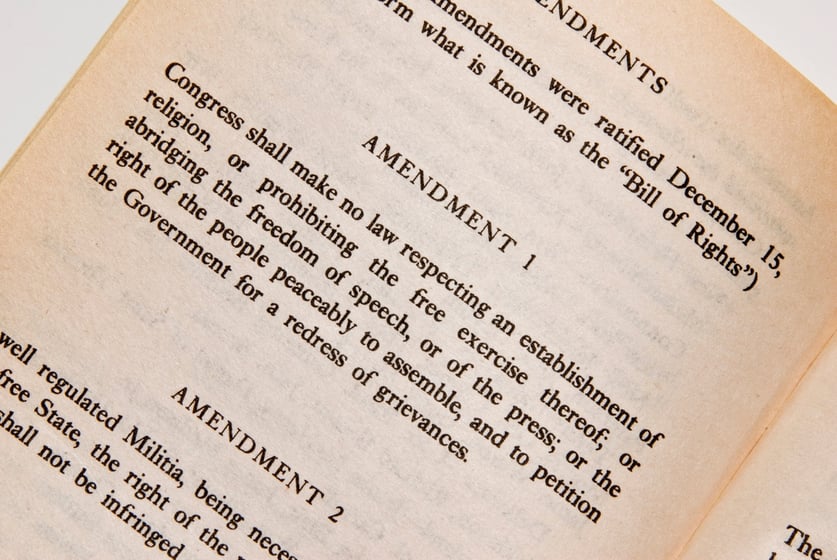 The Importance of First Freedoms

Dr. Paul Rahe offers a sobering reminder of the real purpose behind the First Amendment. In combination, the “first freedoms” (i.e., freedom of religion, speech, press, petition, and assembly) provide the people with everything they need to maintain control of the government. Without them, there are no checks in place to prevent incumbents from legislating themselves into permanent positions of power.

The following video is a clip from Hillsdale’s Online Course: “Public Policy from a Constitutional Viewpoint,” featuring Paul A. Rahe, the Charles O. Lee and Louise K. Lee Professor in the Western Heritage, and John J. Miller, director of the Dow Journalism Program.

The other side, of course, is freedom of religion. Modern liberalism, liberal democracy, is built upon freedom of religion, on taking religious disputes out of the public sphere and making them private matters, and it is the ground that allows Catholics and Protestants and Jews and Muslims and Hindus to live alongside one another in peace. We agree to disagree, and we take certain things out of the public sphere.

There are sort of two sides to the character of our political regime. One of them is limited government, and it's limited because it doesn't have anything to say about religion, and there are implications of that, of course. The other side is it's a republic, which is to say we choose the people who will act on our behalf. We can cashier them, and we do so with great regularity. But if you eliminate freedom of speech, freedom of the press, if you eliminate the freedom to congregate, the freedom to petition, the freedom to make noise, then you've eliminated free elections, and there are a lot of people who would love to eliminate free elections. In fact, almost every politician is tempted—maybe they don't always give way to the temptation—to eliminate free elections, because they surely do not want to risk not being reelected themselves.

Yes. The people out of office really do have an interest in freedom of speech and freedom of the press and so forth, but incumbents, the people who make the laws, don't. What does the amendment say? Congress shall make no laws. It says that because you don't want to put the fox in control of the hen house. You know what you will get if Congress makes laws [concerning those freedoms]. Those laws will be made to protect incumbents.